The U.S. observance of Hispanic Heritage Month, sometimes referred to as LatinX Heritage Month, kicks off on September 15 and ends October 15. Several important, historical events land within this period, including Independence Day for Costa Rica, El Salvador, Guatemala, Honduras, and Nicaragua, on September 15, Mexico’s following on September 16, and Chile’s on September 18. Dia de la Raza (Day of the Race) also known as Columbus Day or Indigenous Peoples’ Day fall within this month on October 12. According to Census.Gov, there were 60.6 million Hispanic-identifying people residing in the U.S. in July 2019, and Hispanic Heritage Month recognizes the roles and contributions of these groups to the building of America as we know it today. In celebration, this week’s BHIC posts will focus on the health and well-being of the spectrum of these identities.

Communities of color are often singled out as the primary population affected by health problems such as obesity and diabetes due to poor diet choices. Though these problems do disproportionately affect minorities including LatinX or Hispanic people, the social determinants causing these health disparities are less discussed or widespread. Issues such as food deserts and lack of access to nutritious foods historically date back to Columbus searching for spices and the economy during the 18th and 19th centuries. The seizure of these territories and resulting blended cultures over time have resulted in the many Latino foods we know today. Find research and health information resources below to learn more and incorporate them along with other nutritious food and drink choices into your lifestyle.

Decolonize Your Diet by Luz Calvo and Catrióna Rueda Esquibel 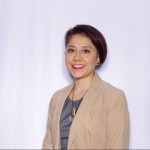 ABOUT Nora Franco
Nora Franco (she/her/ella) works as the Consumer Health Librarian for NNLM PSR at UCLA. She is passionate about eliminating health disparities and empowering people to participate in their healthcare by locating reliable health information.