To celebrate Citizen Science Day 2019, the Stall Catchers Megathon took place around the world on Saturday, April 13th. Citizen Science Day is an annual event to celebrate participation and engagement in real science by members of the general public. On April 13th, libraries in many parts of the country hosted the Megathon, a worldwide event for anyone to join in to analyze real research data in a game format. Local teams gathered in many locations, including public libraries, enabling this global project to have a small town feel while regular people did real science.

I feel like I’ve been working on this since Citizen Science Day 2018! So for me, the amazing thing about Citizen Science Day 2019 was the progress made in getting the word out about the critical role libraries can play in Citizen Science. In the past year we’ve gone from localized displays and other programming, to a national campaign for libraries that included weekly open planning calls; quality promotional resources including bookmarks, posters, and a detailed Librarian’s Guide to Citizen Science; and a project focused on a topic that touches everyone, and includes cool science and a clear explanation of how participating contributes to ongoing scientific research. I want to thank NNLM PSR, and especially Kelli Ham, for being such important partners in the movement to connect Citizen Science and libraries!

The EyesOnAlz blog posted an early peak at the #Megathon research results. The post indicates that the research question addressed on Saturday was whether stalls occur more frequently in the brains of mice that have high blood pressure, and if that stalling can be reversed.

“Despite a slightly rocky road, we broke some serious records during the Megathon weekend! Never before have we done so much research in a single Stall Catchers event, and had so many people playing at the same time. We were featured on Science Friday, and Alzheimer’s Speaks Radio! Plus, we were thrilled to have Australia & Asia join us in a last minute self-organized pre-Megathon event, as well as a group of students from Dickson County High School who were keen to do their part on Monday, and help us finish up analysis of the Megathon dataset!!”

Darlene Cavalier, Founder of SciStarter and Professor of Practice at the School for the Future of Innovation in Society at ASU, added, “The collective accomplishments of Citizen Science Day would not have been possible without the support of NNLM PSR. The support enabled libraries and others to host community-centered events and promote ongoing citizen science programs in ways that transcend a single day.” 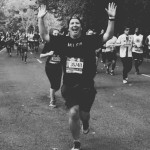 ABOUT Jerry Kauppila
I am a Project and Outreach Assistant for the All of Us research program in the NNLM-PSR. My background is in IT and Marketing, and most recently worked for an academic publisher. I love running the trails of the Santa Monica Mountains, rollerblading the beaches of southern California, street photography, and the food and culture of Los Angeles.